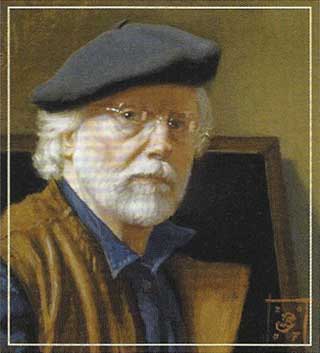 Benjamin Franklin Long, IV is a contemporary artist of international stature. He is renowned as a portrait painter and master of the ancient art of fresco painting. Born in Texas, he grew up in Statesville, North Carolina, and studied at the University of North Carolina at Chapel Hill. From there he began advanced studies at The Art Students League of New York. In 1969, with men his age subject to being drafted into military service, he entered a two-year enlistment in the U.S. Marine Corps with the hope of becoming a combat artist. Initially that opportunity was not available. After serving as an enlisted man, he went through Officer Candidate School, was commissioned, and on his second tour of duty in Vietnam served as Commander of the Combat Art Team. Much of his art from this time period is on display at the Smithsonian Institute.

When military service ended, he went to Italy and became an apprentice to internationally acclaimed artist Pietro Annigoni, learning fresco art techniques while also devoting himself to mastery of oil on canvas. In 1974, desiring to exhibit his skill and at the same time gain greater recognition for fresco art, he arranged with the Rector of Saint Mary’s Parish at that time, the Reverend Faulton Hodge, to create the first in a series of frescoes in Ashe County. The first (Mary Great with Child) was followed by another (John the Baptist). He then began work on what would become the magnificent image which covers the entire sanctuary wall at St. Mary’s Episcopal Church. It has been named The Mystery of Faith. In 1977 he, with a gathering of apprentices and assistants, created a fresco of The Last Supper at Holy Trinity Episcopal Church in Glendale Springs.

In the art form known as fresco painting, the artist presses pigment into wet plaster. The pigment becomes chemically bonded with the plaster and, in so doing, hardens with the plaster to produce a surface that is remarkably resistant to the ravages of time. Fresco paintings date back 3,000 years or more, testifying to their durability. Some of the best known frescoes are those by Michelangelo painted on the ceiling of the Vatican's Sistine Chapel in Rome. Ashe County has been blessed with these awe-inspiring and eternal art treasures. The subject matter and uniqueness have brought countless numbers of visitors to our community.

Artist Ben Long has received numerous awards in his illustrious career. Some of his many achievements are described on his website, along with information about his current endeavors. See BenLongFineArt.com